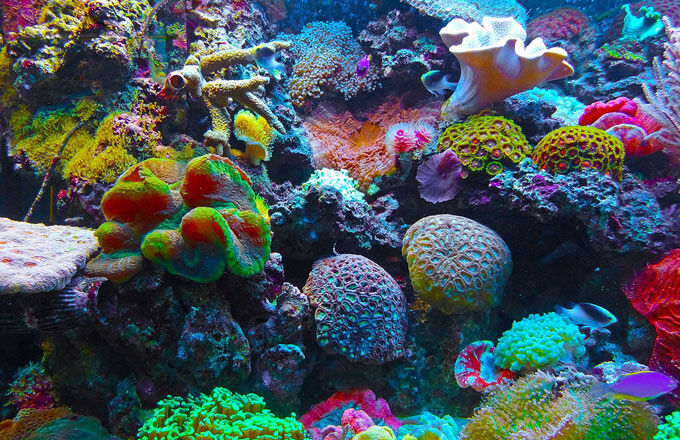 For the scuba diver, the coastal fringe, mainly on the east coast, offers the greatest diversity of environments and fauna in a few meters of water. The cays are real fairytale gardens where you never tire of admiring the abundance of madrepores and corals. Their limestone skeletons, slowly shaped over the years by the tiny polyps to which they serve as shelters and supports, skilfully intertwine to form living bouquets whose diversity of shapes and colors are a continuous wonder for the eyes. With delicate branches, tufts of fire coral which inflict on those who burn stinging burns, mingle white rounded structures in the shape of brains with finely chiseled convolutions, honeycombs and fragile lime scales or fine star tubules. , the corollas of the Fungi and the majestic acropores which extend around the reef of impenetrable forests with powerful antlers like deer antlers or elephant ears.

Among the corals, the flexible gorgonians spread their fine ramifications, fans or candlesticks of color which undulate according to the currents. Innumerable encrusting organisms cling to the slightest roughness, covering the rocks, dead coral or even living branches: white or pink cuticle of calcareous algae with the appearance of candy sugar (Lithothamnia) red or yellow velvety sponges, in tubers , in plates or in the shape of fingers. Ringed worms living in limestone tubes spread from place to place their plumes of gills which retract at the slightest jolt and the sea anemones offer the viewer waves of undulating flowers in all shades of greens and purples.

The echinoderms are numerous on the reef, starfishes and brittle stars with agile arms abound there as well as the enormous “sea cucumbers” (holoturias) which move slowly on the sand near the cays and between the mates of corals. The “chadrons” (white sea urchins of the genus Tripneustes) are the subject of an active harvest there to be eaten in blaff ”or with a view to the preparation of the famous roasted chadrons presented to seafood lovers along the beaches in the form of a sea urchin test filled with eggs from several others, grilled over a wood fire. More formidable are the black sea urchins of the genus Diadema carrying very long sharp quills constantly in motion. To the reckless or reckless diver, they leave a burning memory for several days. Other types of sea urchins with less classical morphology are also found in large numbers in the West Indies. Some, like the “pencil sea urchins”, (Cidarides) have only a few enormous blunt prickles articulated on large tubers, others covered with innumerable small spicules in velvet are burrowing like the clypéastres and the scutelles with the oval or shaped body of hearts whose plates draw a flower with five petals. Still others are flattened to the point of measuring only a few millimeters thick like the “sand dollars” (Melitta) in the perforated test of five slits.

In addition to the fish which will be discussed more fully below, crustaceans are among the main inhabitants of the reefs whose crevices are safe shelters from predators. In the Antilles, the family of sea crabs includes very many species, of which we will only cite the “tou’teaux” (Carpilius corallinus) whose appearance is quite comparable to the European crabs and the “cyriques”. The term Creole Cyric generally designates all the representatives of the family of the Portunidae, very agile, provided with long pincers and whose shell armed with strong thorns makes the capture delicate for the neophytes. According to the genera, which are numerous (Callinectes, Portunus, Aranaeus etc.) the cyriques are more or less colored, striped or “ticked” (spotted).

But the most famous crustaceans in Caribbean waters are undoubtedly the lobsters. There are five different species which are generally wrongly called “lobsters” in Creole patois. We thus speak of “white lobster” (Panulirus argus), “bissie lobster” (P. guttatus) or even “Indian lobster” (P. laevicauda). Curiously, a small bright orange lobster (Palinurellus gundlachi), the only species whose morphology is quite far from that of typical lobsters, is designated in Martinique under the name of “true metropolitan lobster”. White lobster and bissie lobster (also called “Brazilian”) are the most abundant; the first has a marked preference for the herbarium areas surrounding the reefs while the second lives on small rocky or coral bottoms – links where it sometimes abounds in a few meters of water. In certain areas of the coast, the slightest crevice serves as a hiding place for one or more lobsters from which only the long antenna whips emerge. The attentive observer can also detect their presence in the sharp squeaks which they emit by means of their stridulating organs, located at the base of the antennas. Long neglected by the West Indian fishermen of the past who crushed them in the traps as bait, lobsters have been highly sought after since the tourist boom in the islands began.

Close relatives of lobsters, sea cicadas or scyllares are less abundant and better camouflaged and are fond of sandy bottoms. There are three species, the two largest of which (Scyllarides aequinoctalis and Parribacus antarcticus) can weigh up to one kilogram. They are wrongly considered by Creole fishermen as the lobster females and named, without distinction of species, “lobster mom”. They are also called “savates” because of their flattened shape, or “sea ravets” because of their resemblance to large cockroaches (ravets) or, for less obvious reasons, “Marie Carogne”. It is impossible to complete this brief panorama of the marine biotope of the Antilles, as quickly as we wanted to brush it, while passing in silence the extraordinary beauty and the great abundance of malacological fauna. The choice of examples is difficult among the many species of shellfish living in these waters, as the shapes and colors are so diverse. In the class of gastropods the family of strombidae, called “conch” in Creole is one of the most important. The giant conch (Strombus gigas) whose yellow shell with a large bright pink opening frequently weighs more than a kilogram, is famous for its foot consumed in the form of delicious skewers. In the past, the Caribbean Indians carved jewelry and tools from these thick shells, which are little more used today than weights or borders of flowerbeds in the gardens of West Indian fishermen. Smaller are the fighting conchs (Strombus pugilis) with a bright orange varnished test, the frog conchs (Strombus raninus) and the rooster conchs (Strombus gallus) with slender digitations.

All these species generally live in the immediate vicinity of the cays, on the surrounding seagrass beds, just like the newts (Charonia tritonis) with sharp spiers. Helmets (Cassis madagascarensis and C. tuberosa) prefer the sandy bottoms on which they can be observed, half buried, devouring sea urchins which they are very fond of and which they absorb entirely, including the thorns. But we still meet the brilliantly shiny olives and porcelains (cypresses), the “collectors” (Xenophora) who camouflage themselves by clumping on their back the debris of other shells or fragments of coral, the spindles which are fond of muddy areas , the “Burgos” (Trochus pica) with large black flames that venture onto the rocks emerging at the edge of the beaches and many others. As for the bivalves, whose list is also impressive, one of the most remarkable is the spondyle or thorny oyster (Spondylus americanus) with the shell decorated with rows of long sharp thorns and delicate fringes and which offers an infinite variety of shapes and of colors, from the purest white to scarlet red through all the shades of orange and purple. The spondyles live fixed by their lower valve on the corals or at the foot of the gorgonians and their shell often serves as support for a variety of encrusting sponge of a bright red. Finally, the “sudder” (Lucina jamaicensis), a small burrowing bivalve, deserves a special mention not for the beauty of its shell but for its abundance in the sandy “white bottoms” of certain beaches where it is harvested to be sold on the markets. where we make a big deal of it.