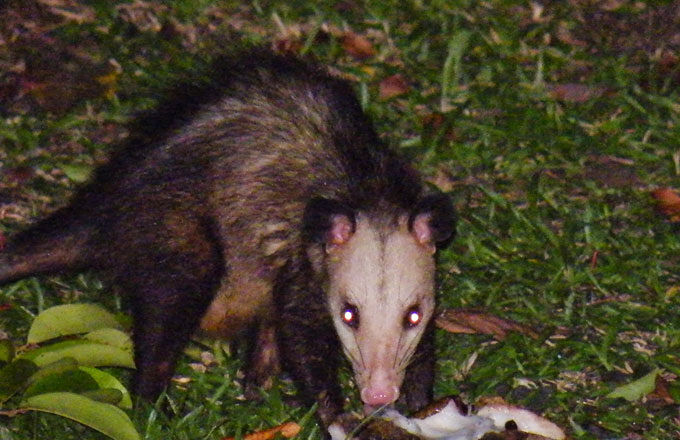 Strange animal, “awful monster” and bizarre if one believes the description of R. P. Du Tertre: “… This animal has something of the rat, the fox, the monkey and the pig, that which I live was a little larger than a cat, all the hair which covers it was of a very brown gray, and he felt so strongly the book that he was sick to his heart, he had the long test like that of a fox, which was a little like the groüin of a pig, his mouth was tall, full of cat teeth, and even two whiskers like those of cats: he had a tail almost twice as long as his body, half hairy, half peeled like that of a rat; the habitâs assured me that it was so strong, that it hung by the end from the branches of the trees, and darted from tree to tree, with marvelous lightness … “

All these animals in one, it is our Manicou also known on the American continent under the name of Opossum, the only representative of the order of Marsupials in the Antilles where its area of distribution extends in all the Small Antilles, from Grenada to Dominica, including therefore Martinique. Guadeloupe like all the northern islands does not have it. Our Manicou belongs to the family of Didelphidae or Sarigues, which are small marsupials reaching at most the size of a cat and, often do not exceed that of a rat. They have a stocky body and a more or less pointed muzzle. Their hind limbs are a little longer than the forelimbs. They have a marsupial pocket.

During the tertiary era, there were Didelphidae in Europe, but nowadays, they are found only on the American continent where they nest in hollow trees or in holes dug among grasses and bushes.

They are certainly not native to the islands of the Lesser Antilles, where they came from the South American continent, a long time ago. The bones and, among other things, the jaws of this marsupial, found by R. P. Pinchon in the Caribbean excavations at Paquemar (Vauclin) in Martinique, demonstrate their existence at least from the time of the Caribbean.

The manner in which they arrived on the different islands remains a matter of hypothesis. Some believe that it was the Caribbean Indians who introduced them to them during their visit to the islands. Others on the other hand think that they arrived well before the Caribbean, leaving the South American continent on driftwood for example, at the time when the species was not yet completely stabilized. They would have settled in Grenada and thus would have arisen our subspecies (Didelphis marsupialis insularis A) different from the species coming from the continent. Then, on driftwood for example, they could have crossed the short distances separating the different islands, thus establishing themselves in most of the Grenadines (Bequia, Moustique, Cariacou, Ile Ronde, etc.), then in Saint-Vincent, in Saint Lucia, Martinique and finally in Dominica, but not in Guadeloupe. This is the whole mystery of the origin of our animal population!

Unlike the Mongoose, the “Manicou” is a nocturnal animal, it is at this moment that it leaves its hiding place to go in search of its food or in search of a companion during the mating period . He leads a nomadic and lonely life. We can observe it in the trees going from branch to branch suspended by its catching tail, in search of fruit (mangoes, soursop) or even visiting the countryside in search of frogs, insects, worms, rats which constitute the basis of his diet.

He is not afraid to approach inhabited places, a pile of garbage may well be the place allowing him to eat cheaply. A chicken coop is just as welcome, it is literally plundered. Surprised, our Manicou tries to flee, if the escape is impossible, it spreads a strong allied odor, takes a threatening attitude by opening a wide mouth, or else “plays dead”: lying on its side, motionless, eyes closed, mouth ajar, tongue hanging out. According to some authors, this attitude is purely involuntary. In reality, a violent emotion causes in the “Manicous” a kind of lethargy caused by adrenaline which spills in large quantities in their blood. This sudden rush of adrenaline results in a kind of syncope which changes the heart rate, that of breathing and the temperature of the body during all the time that this strange torpor lasts. Martinique hunters know this reaction well, do not allow themselves to be deceived, and take the opportunity to capture our Manicou.

The original reproduction mode of manicou

The gestation period is extremely short, 12 to 13 days on average. A litter can have 8 to 18 pups. The originality of this reproduction is that the young ones, while being born still have a larval form with strong nails on their front legs which will be used to them to reach the marsupium, pocket located between the hind legs of the female where they will finish their development. It is inside the marsupium that the teats are found, a kind of udder that the “Manicous babies” push deep into their mouths. They can suck and breathe at the same time, although this teat descends into their esophagus and remains suspended from the teat for around 70 days.

At ten weeks, the young begin to come out of the marsupial pocket, they climb on the back of their mother and cling to her coat. At the slightest noise, they take refuge in the marsupium where they continue to breastfeed. At the age of three months, they definitively leave the pocket to live independently. The number of litters per year is on average two.

Despite a high mortality at birth (in some cases out of 15 nascent embryos, 7 manage to enter the marsupium) and the hunt given to them, the “Manicou” is still currently an animal well established in Martinique. You can meet them in the evening on the roads. Dazzled by the headlights of an automobile, they remain motionless in the middle of the road and are killed or captured alive. Leading a “nomadic” life, they circulate throughout Martinique. You can see them on the road from Balata, to Ducos, to Rivière Pilote, to Sainte-Anne, and especially near the banana plantations after it has rained. But the fact remains that the big woods, around the Pitons du Carbet and the Pelée Mountain constitute its field of election. 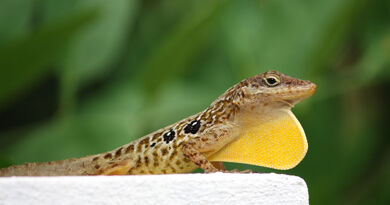 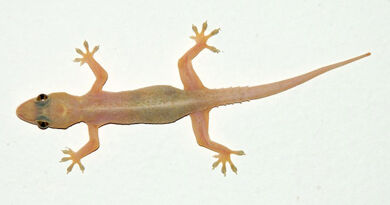 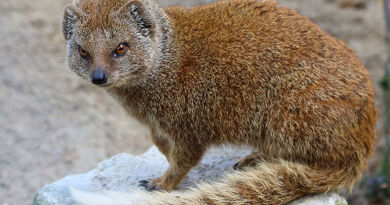